Cities of the Ancient Middle East 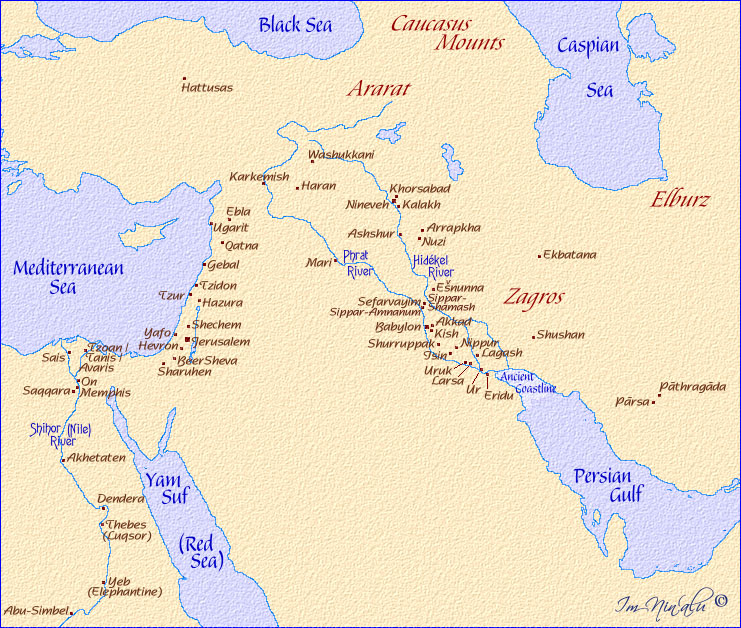 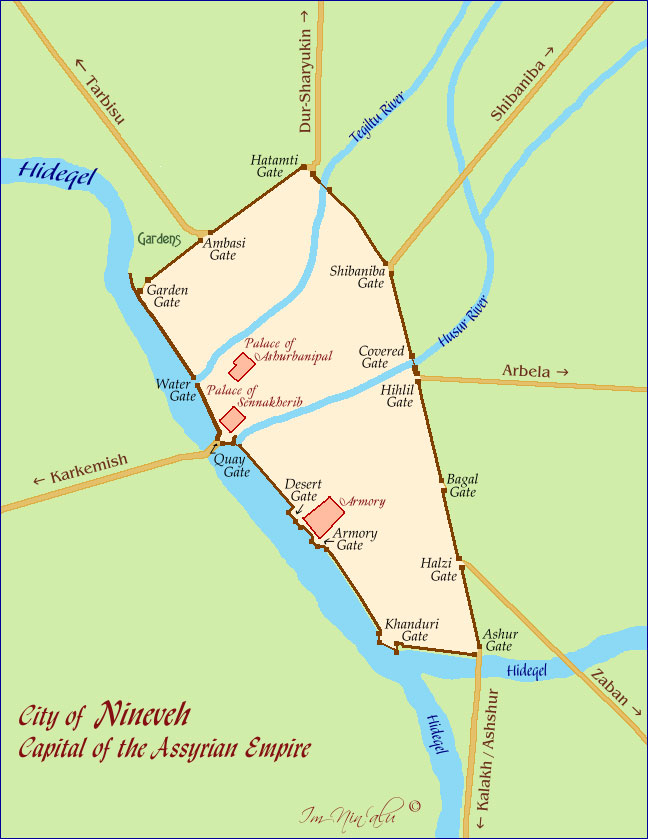 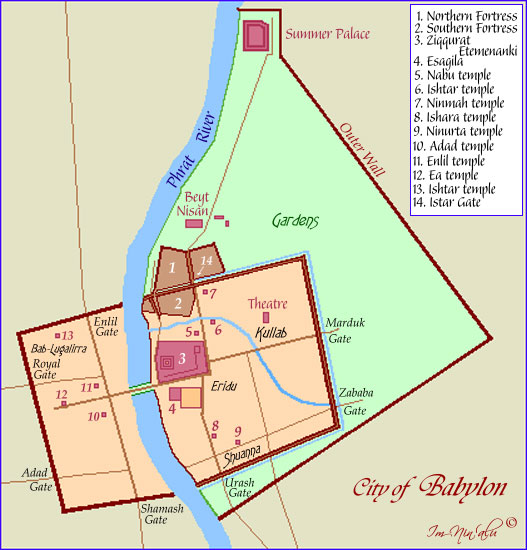 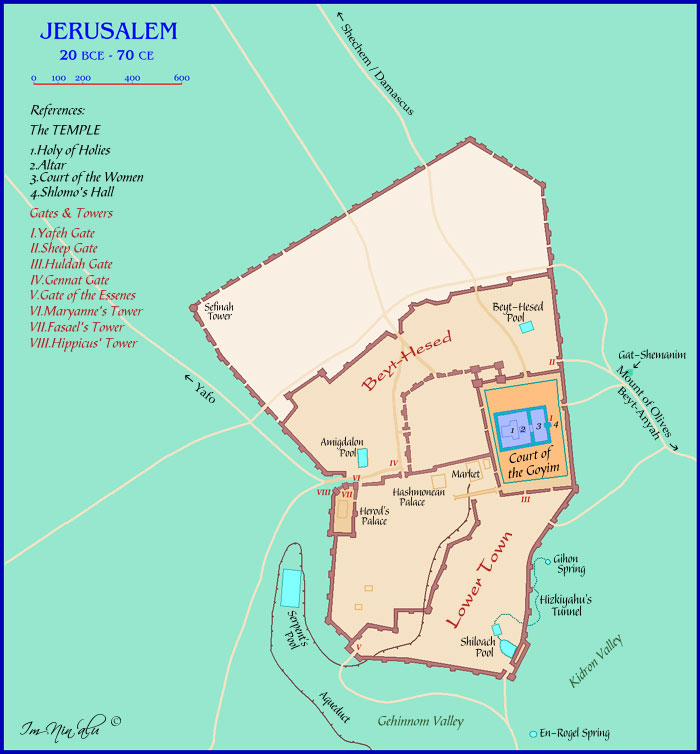 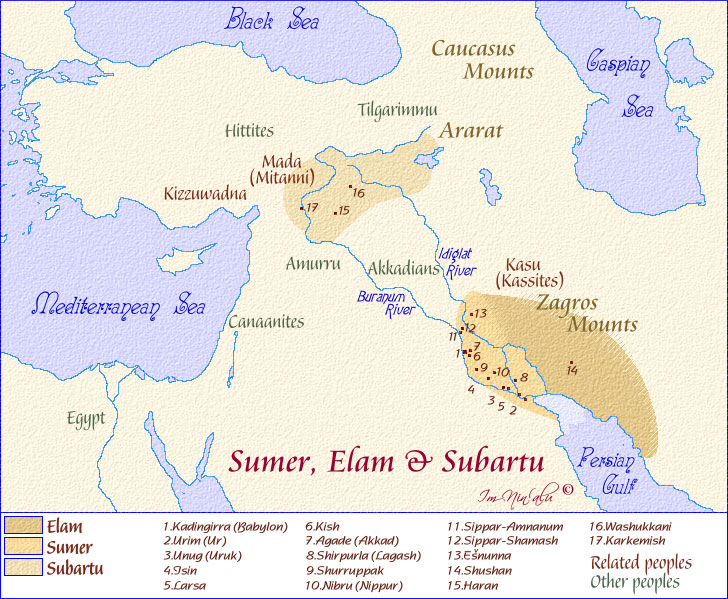 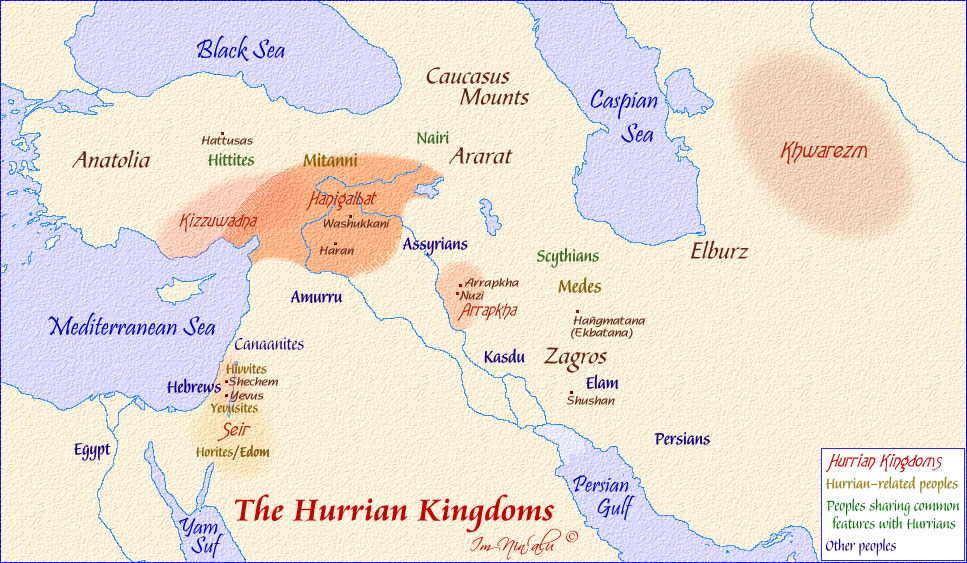 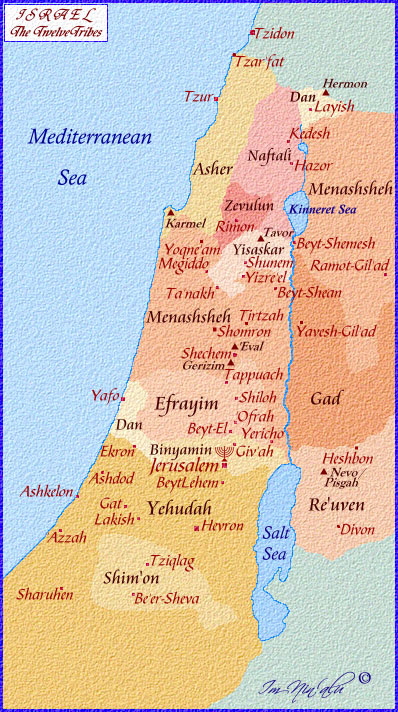 The Kingdom of Israel under David and Solomon 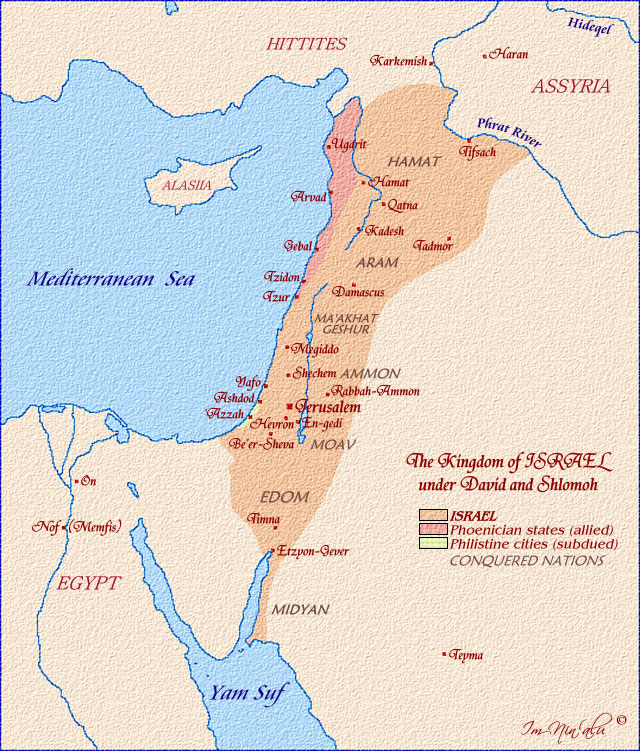 At the maximum extent, including some internal kingdoms that kept their own kings as vassals
under Assyrian sovereignty (Urartu-Tilgarimmu, Judah).
Other lands outside the Empire had an Assyrian viceroy (Khayappa, Mushri, Dilmun, etc.)
but were not considered part of the Empire itself. 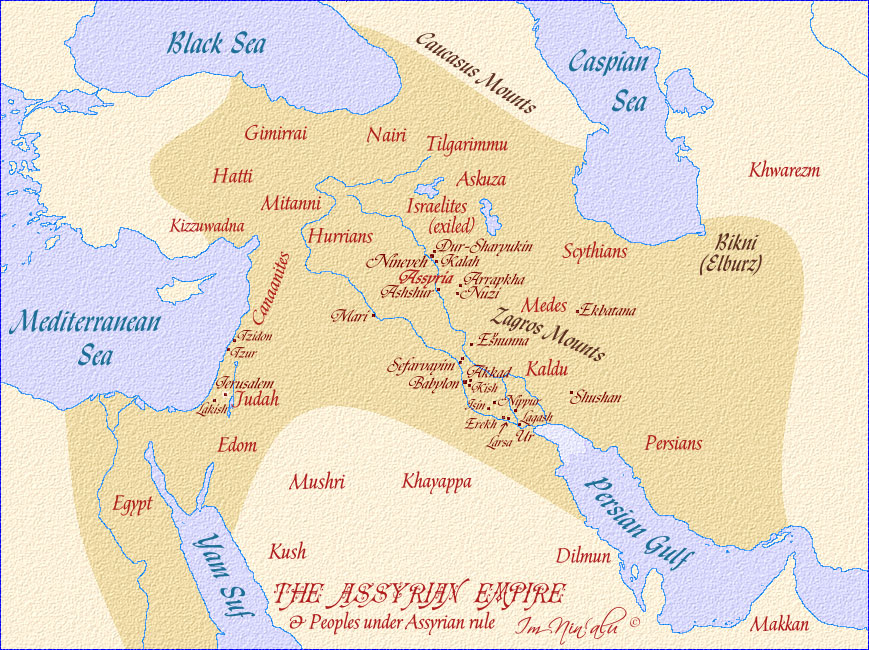 The Assyrian Empire
under Tiglat-Pileser III

Tiglat-Pileser III performed several campaigns to reassert his sovereignty over vassal kingdoms.
He carried out two deportations of Israelites:
"Tiglat-Pilne'eser king of Ashur carried them away, even the Re'uveni, and the Gadi, and the half-tribe of Menasheh,
and brought them to Chalach, and Chavor, and Hara, and to the river of Gozan" (1Chronicles 5:26),
that was the deportation of the Tribes on the eastern side of the Jordan;
"In the days of Pekach king of Israel came Tiglat-Pil'eser king of Ashur,
and took 'Iyon, and Avel-Beit-Ma'akhah, and Yano'ach, and Kedesh, and Chatzor, and Gil'ad, and the Galil,
all the land of Naftali; and he carried them captive to Ashur" (2Kings 15:29);
that was the deportation of the northern Tribes, that did not affect Efrayim and western Menasheh. 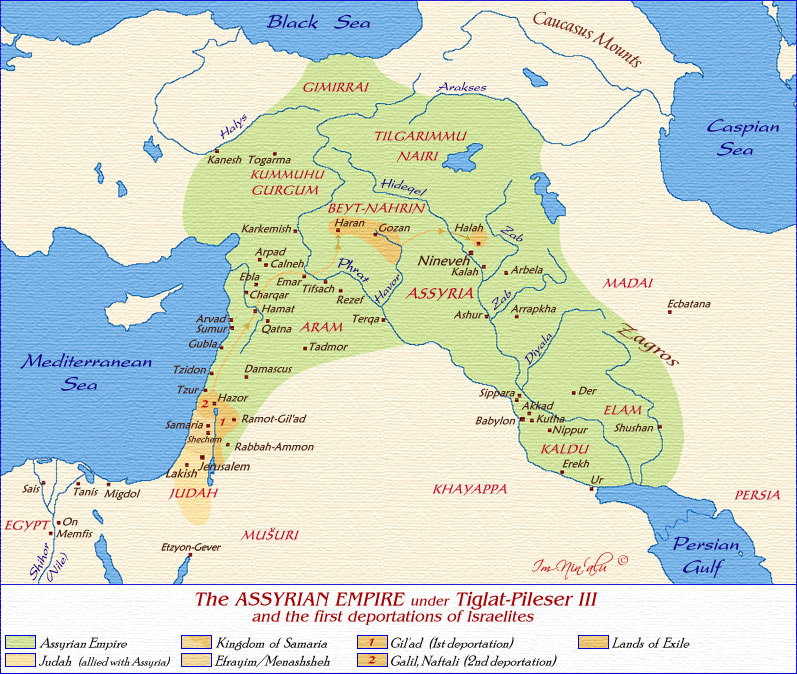 The Assyrian Empire
under Sargon II

Salmaneser V besieged Samaria but the final conquest of the city was achieved by Sargon II,
that deported about 30,000 Israelites of the Tribes of Efrayim and Menasheh
to the cities of Media, besides the previous resettlement areas:
"In the ninth year of Hoshea the king of Ashur took Shomron,
and carried Israel away to Ashur, and placed them in Chalach, and on the Chavor, the river of Gozan,
and in the cities of the Madai" (2Kings 17:6). 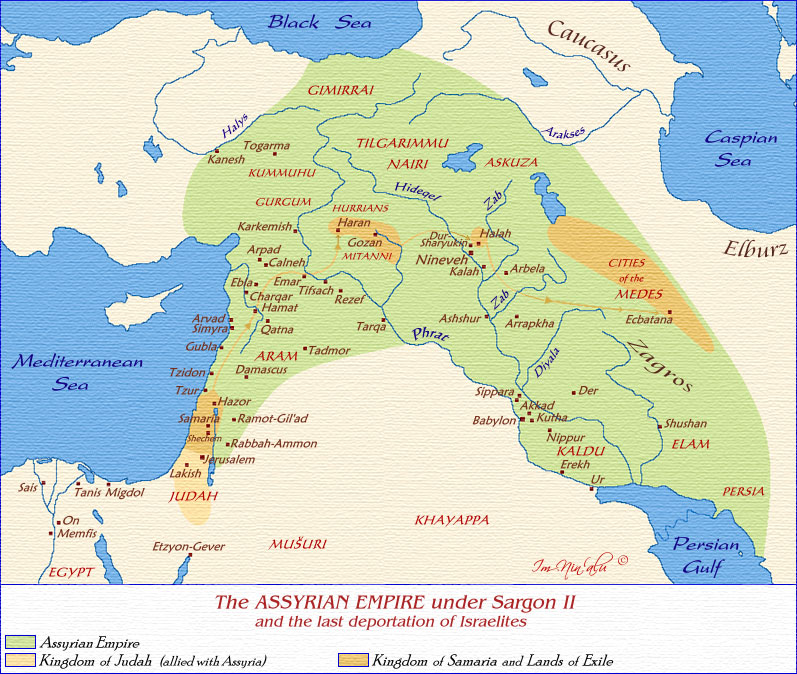 The Assyrian Empire
under Assarhaddon and Assurbanipal - Internal Resettlement of Peoples

Sargon II replaced the exiled Israelites with deportees from the area of Babylonia and Aram:
"The king of Ashur brought men from Bavel, and from Kutah,
and from Avva, and from Chamat and Sefarvayim,
and placed them in the cities of Shomron instead of the children of Israel;
and they possessed Shomron, and lived in the cities" (2Kings 17:24).
There is an uncertainty concerning Sefarvayim, name that corresponds to the twin cities of Sippar in Mesopotamia,
but the religious practices of those people were not Babylonian but Canaanite (2Kings 17:31),
therefore it is probable that such name was applied also to Arvad and Sumur (Simyra, Sibraim) in Phoenicia.
Successive resettlements in Samaria were carried out by Assarhaddon and Assurbanipal (Asnappar):
"Then wrote Rechum the chancellor, and Shimshai the scribe, and the rest of their companions,
the Dinaites, the Afarsatkhi, the Tarpelites, the Afarsi, the Arkevi, the Bavlites, the Shushankhites, the Dehites, the Elamites,
and the rest of the nations whom the great and noble Asnappar brought over,
and set in the city of Shomron, and in the rest of the country beyond the River, and so forth" (Ezra 4:9,10). 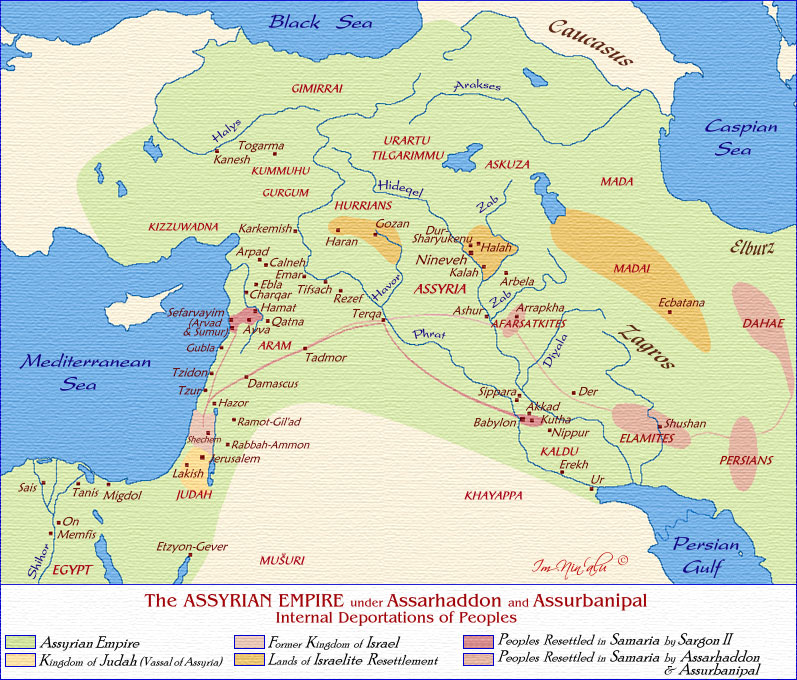 The Babylonian Empire
under King Nebukhadnetzar

The Babylonian Empire was built by King Nebukhadnetzar and lasted few years after his death.
Nebukhadnetzar besieged Jerusalem and performed three deportations of the inhabitants of the Kingdom of Judah to Babylon.
With the last deportation he destroyed Jerusalem and almost the whole population went in exile;
initially relocated in different lands to those where the deported Northern Israelites dwelled,
the exile of Judah lasted only 70 years; after then, only a few of them returned back to Jerusalem.
They became numerous throughout the Medo-Persian Empire that succeeded the Babylonian;
in that period, they also shared the same lands inhabited by the Northern Israelites. 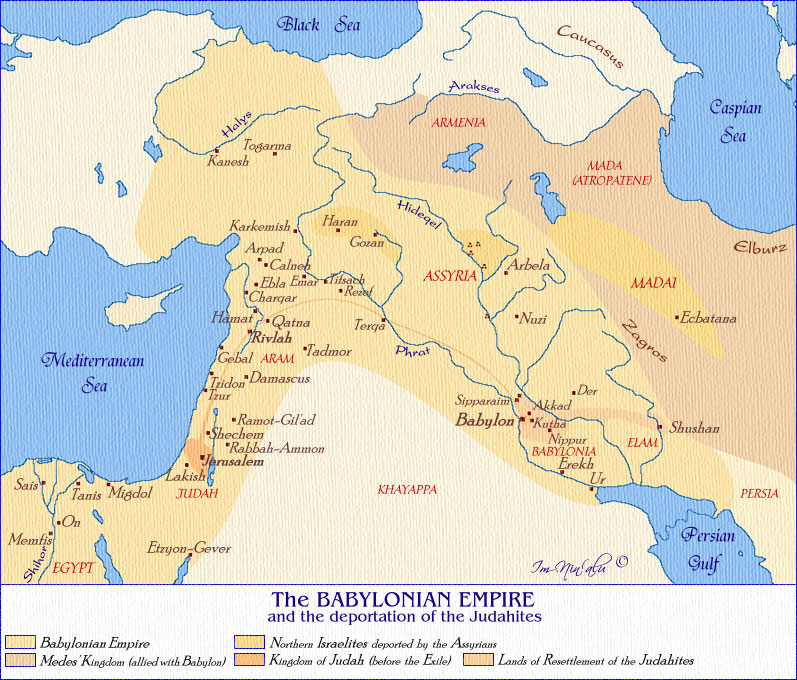