Born Michel Dahmani in an Andalusi Gypsy family. His troubled youth has been the school in which he learnt the backround for the films of which he is director, characterized by their crude realism. Since he presented his first feature film in 1975, his popularity has been continuously increasing.

Her birth name is Marcia Nicole Rani, she is the daughter of a survivor from the Romany Holocaust. Actress, playwright and singer, she mainly performs the role of the ″bad girl″ in action and thriller movies. She acts also as stuntwoman in difficult scenes. Settled in the United States, she has also her own music band. Her performances are usually controversial for their crudeness and violence, althogh she personally admits not being of such character in real life. 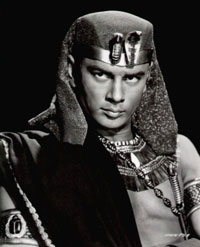 A family of actors, musicians, singers, dancers and artists, the Buzylyov have featured in several films, some of them of worldwide success, like “Tabor Uhodit V Nebo” and “Sibiriada”. They have not only acted, but also composed songs for the films. The best known members of the eight siblings are: Viktor, the elder brother, a great composer; Dmitryi, the most famous, poet and actor; their younger sister Alena Buzylyova, who has become a recognized singer, and also Mikhail, actor.

Theatre actor since his youth, he survived the World War II, in which he lost his father and other members of his family. He has won several important awards as People's Artist of the USSR (1981), State Prize of the USSR (1987), and the Order for the Service to Fatherland (2004). In 1977 he was appointed as Producer of the Romen Theatre of Moscow. There is also a star named after him.

The most prestigious harpist of the 19th century, John Roberts belonged to the Wood family, a dynasty of Welsh Romany musicians founded by the violinist Abram Wood, who had more than twenty outstanding harpists among his descent. John Roberts was awarded many prizes and honoured as the “Telynor Cymru”. He played personally for Queen Victoria in several occasions, also with his nine sons and a daughter, all of them skilled musicians. 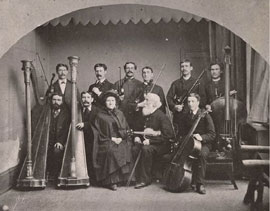